Bone mineral density assessment by DXA imaging is considered by the World Health Organization as the “gold standard” to diagnose osteoporosis and is the most widely used assessment technique for determining treatment effectiveness. DXA is a non-invasive, relatively safe modality for measuring areal BMD (aBMD), which is defined as BMC per unit area in g/cm2. DPA is an older technology for measuring aBMD that is sometimes reported in studies conducted before the 1990s.

Increases in areal BMD (aBMD) are presumed to be a suitable surrogate outcome for fracture risk reduction when assessing the effectiveness of SLOP therapy. “Optimal therapeutic outcome” would be defined as an increase in knee region BMD above the fracture threshold in the absence of fragility fracture. 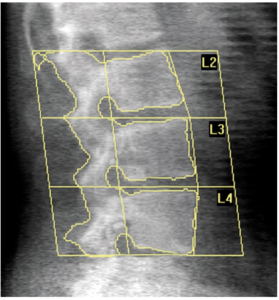