The Consensus Committee of the American Autonomic Society and the American Academy of Neurology (CCAAS & AAN 1996) defined orthostatic hypotension (OH) as a decrease in systolic blood pressure of at least 20mmHg, or a reduction in diastolic blood pressure of at least 10mmHg, upon the change in body position from a supine to an upright position, regardless of the presence of symptoms. Several studies have documented the presence of OH following SCI (Chelvarajah 2009, Cariga et al. 2002, Faghri et al. 2001; Mathias 1995). This condition occurs during the acute period of injury and persists in a significant number of individuals for many years (Sidorov et al. 2008; Claydon et al. 2006; Frisbie & Steele 1997). Standard mobilization treatment during physiotherapy (e.g. sitting or standing) is reported to trigger blood pressure decreases that are diagnostic of OH in 74% of SCI patients, and cause symptoms of OH (such as light-headedness or dizziness) in 59% of SCI individuals (Illman et al. 2000). Thus, this may discourage individuals with SCI from participating in rehabilitation. Management of OH consists of pharmacological and non-pharmacological interventions. 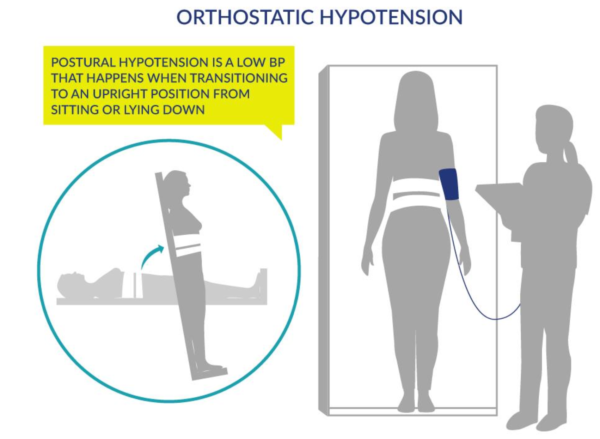 The low level of efferent sympathetic nervous activity and the loss of the reflex vasoconstriction following SCI are the two major causes of OH (Figure 1). Decreases in blood pressure (BP) following the change to an upright position in individuals with SCI may be related to excessive pooling of blood in the abdominal viscera and lower extremities (Krassioukov & Claydon 2006; Claydon et al. 2006; Mathias 1995). This decrease in BP is compounded by the loss of lower extremity muscle function post SCI that is known to be important in counteracting venous pooling in the upright position. Excessive venous pooling in the lower extremities coupled with reduced blood volume in the intrathoracic veins lead to a decrease in ventricular end-diastolic filling pressure and end-diastolic volume thereby decreasing left ventricular stroke volume (Ten Harkel et al. 1994). Reduced ventricular filling and emptying ultimately lead to a reduction in cardiac output, and thus, arterial pressure (provided the reductions in cardiac output are marked). Unloading of the arterial baroreceptors induces a reflexive reduction in cardiac parasympathetic (vagal) activity. As a result, heart rate increases, although this is usually insufficient to compensate for decreased stroke volume. Therefore, cardiac output is reduced, which in turn, lowers arterial blood pressure. Subsequent pooling of blood in the lower extremities further decreases blood pressure, which may result in reduced cerebral flow, and symptoms of cerebral hypoperfusion (Table 2).

In addition to central causes of OH following SCI, there is also some evidence suggests that peripheral mechanisms also could contribute to orthostatic intolerance following SCI. For example, up-regulation of the potent vasodilator nitric oxide (NO) could potentially contribute to the orthostatic intolerance in this population (Vaziri 2003). In animal studies, it has been shown that NO synthase expression is dysregulated following SCI (Zhao et al. 2007). Moreover, Wecht and co-investigators found that intravenous infusion of a relatively low dose of the NO synthase inhibitor L-arginine-N-methyl-ester (L-NAME) normalized blood pressure in individuals with SCI (Wecht et al. 2007). 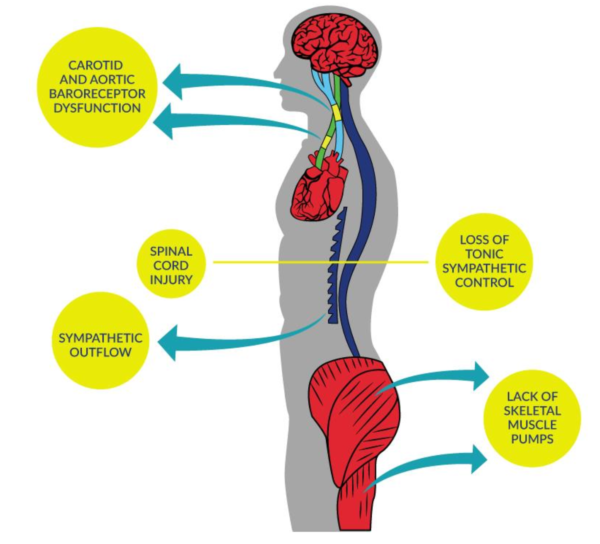 Signs and Symptoms of OH