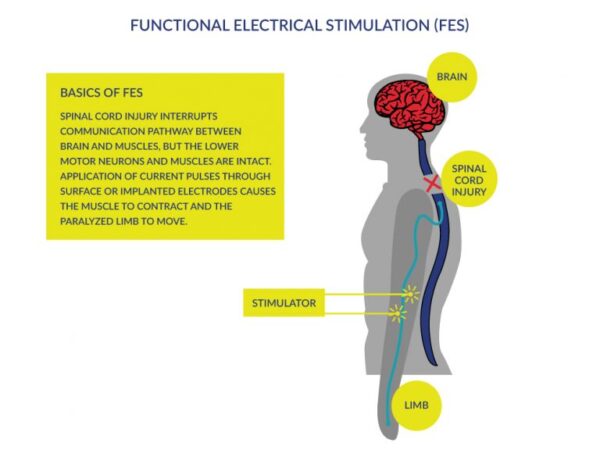 After SCI, it is well established that muscles experience deconditioning, especially those denervated following complete SCI. The most visible effect of deconditioning is muscle atrophy, characterized by a reduction in size of individual muscle fibers (Castro et al. 1999a; Castro et al. 1999b). Deconditioning is also associated with a complex cascade of biochemical events and alterations over time in muscle composition such as changes to muscle fiber type (Stewart et al. 2004; Round et al. 1993). Functionally, these changes manifest as loss of strength and endurance of muscular contractions and have been targets for various interventions. It should be noted that there might be additional benefits to enhancing muscle structure and function in addition to the immediate functional consequences of enhancing strength and endurance. For example, muscular contractions have the added potential of ameliorating loss of bone density following SCI. In addition, Anderson (2004) noted that future treatments developed for chronic SCI may require the reversal of muscle atrophy in order for benefits of the treatment to be detectable. Others have noted the potential health benefits (e.g., reduction in secondary conditions) that may be associated with reducing muscle atrophy and enhancing muscular strength and endurance (Shields and Dudley-Javoroski 2006). Various rehabilitation techniques have focused on reducing or reversing these detrimental changes to the muscles of the lower limb following SCI.

A variety of electrical stimulation techniques have been employed to enhance lower limb muscle structure and function in people with SCI. These typically involve delivering a series of electrical pulse trains to the muscle (or nerve supplying the muscle) over time such that it simulates the “normal” exercise experience. Specific stimulation parameters (i.e., pulse width, training duration, between training intervals, method of application) and other exercise-related variables (i.e., frequency, duration, intensity, and program length) may each be varied to attain an optimal training stimulus. Given the number and variety of these factors, it is not surprising that there is considerable heterogeneity among the specific electrical stimulation interventions that have been investigated to date. In the present review, we focus on two strategies: NMES and FES. Whereas both methods typically employ cyclical patterns of electrical stimulation that simulate natural muscular activity, FES is directed towards the attainment of purposeful movements such as cycling or walking, although it has also been used to address other issues such as pressure sores and spasticity (Bersch et al. 2015, Kawasaki et al. 2014). NMES, on the other hand, is focused on producing muscle contractions to generate muscle force such as in an isometric condition. In some applications, NMES techniques have been used as a training stimulus to prepare muscles for a subsequent FES training condition (e.g., Kern et al. 2005; Hjeltnes and Lannem 1990). In situations where increased muscle torque and endurance are primary goals to improve function, for example in the quadriceps in an incomplete SCI, the outcomes of these experimental studies have direct clinical relevance.