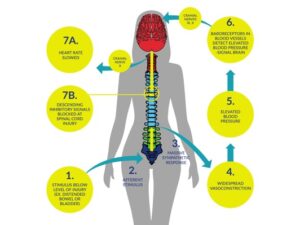 AD is most commonly triggered by urinary bladder or colon irritation. However, many other causes have been reported in the literature (Teasell et al. 2000; Mathias & Frankel 2002). AD is caused by massive sympathetic discharge triggered by either noxious or non-noxious stimuli below the level of the SCI (Krassioukov & Claydon 2006). Numerous reports of AD have been described in the literature: episodes are usually short-lived either due to treatment or inherently self-limiting. However, there are reports of AD triggered by a specific stimulus, which then continued to be present for a period of days to weeks (Elliott & Krassioukov 2006).

Numerous mechanisms have been proposed for the development of AD. It is known from animal studies that autonomic instability following SCI results from plastic changes occurring within the spinal and peripheral autonomic circuits in both the acute and chronic stages following injury (Mathias & Frankel 1988; Teasell et al. 2000; Mathias & Frankel 2002; Krassioukov 2006). The destruction of the descending vasomotor pathways results in the loss of inhibitory and excitatory supraspinal input to the sympathetic preganglionic neurons; this is currently considered the major contributor to unstable blood pressure control following SCI (Furlan et al. 2003). Furthermore, there is significant animal and human evidence suggesting that plastic changes within the spinal cord (specifically spinal sympathetic neurons and primary afferents) underlies the abnormal cardiovascular control and the development of AD following SCI. Altered sensitivity of peripheral alpha-adrenergic receptors (receptors in the sympathetic nervous system) is one mechanism that may contribute to AD (Osborn et al. 1990; Arnold et al. 1995; Krassioukov & Weaver 1995, 1996; Karlsson 1999; Krassioukov et al. 1999; Krassioukov et al. 2002).